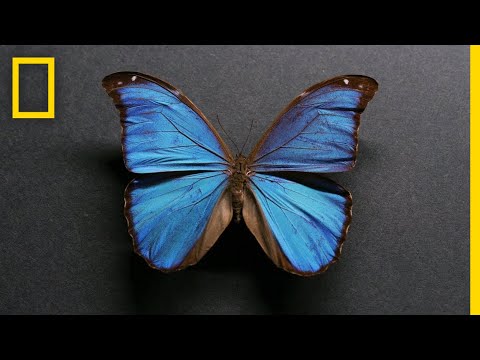 [music playing]
Sometimes nature plays tricks on us.
What we think we know to be true may not be.
Animals, for example, have lots of secrets,
like their remarkable use of color
to attract mates or disguise themselves from predators.
Well, it turns out they’ve been using
colors in ways that have been tricking us humans as well.
We reached out to the Explorer and [inaudible] communities
to crowdsource this special Explorer segment, True Blue.
[music playing]
NARRATOR: White, black, red, green, yellow.
Animals have evolved to come into every color
of the rainbow.
But with few exceptions.
Animals are not blue.
For animals most color comes from pigments,
color chemicals that are produced by special cells.
Pink, orange, chartreuse, animals
can produce many different types of color pigment,
but blue is a problem.
NARRATOR: Some animals appear blue,
but they’re deceiving you.
SARAH GARRET: Instead of using pigments,
most blue animals have developed a way to trick your eyes
and play with light, using physical structures
to appear blue.
Most of the blues you think you know really aren’t blue.
[music playing]
NARRATOR: Humans can only see light in what we call
the visible spectrum, a narrow band
of electromagnetic wavelengths.
Color is how we perceive different wavelengths
of light in that spectrum.
And that visible spectrum contains all the colors
that we see in this world.
SARAH GARRET: This is the blue morpho butterfly.
Yes, the emoji one.
It is the perfect example of an animal that only appears
blue because of the clever way that its wing
scales interact with light.
Similar to how a prism disperses different wavelengths of light,
a blue morpho wing has microscopic structures
that scatter light to cancel out other colors,
reflecting only blue.
This is based on how the light reflects.
As you change your viewing angle,
different colors appear stronger,
giving us an incredible iridescent
effect, the tell tale sign of a fake blue.
And because that reflection is based on the structure
of the wing, if you filled that structure with something
different, say, alcohol, that color would change.
Don’t worry.
It dries back to blue.
Many other animals use physics to deceive us.
For example, there are no blue feathers on birds.
All birds that appear blue have some structure
in their feathers that reflects only blue light.
And almost all fish use light scattering
to create their vibrant blues.
Less than 1% of the animals that you perceive as blue
actually have any blue pigment in them.
That 1% with blue are very rare.
They are true blues.
[music playing]
NARRATOR: This is the olivewing butterfly.
It’s one of very few insect species on Earth known
to have a true blue pigment.
This is the blue poison dart frog,
one of the only vertebrates known to contain blue pigment.
No matter how you look at them, they’re blue.
All of the other animals only appear blue.
You may perceive blue, but it’s because these animals have all
evolved a way to trick your eyes,
using the physics of light to control what you see.
But why blue?
Maybe it’s to let predators know that you’re poisonous.
Maybe it’s to impress a mate.
Maybe it’s because blue pigment is so rare,
and evolving a way to fake blue simply allows certain animals
to stand out from the crowd.
We don’t yet know why blue is so rare.
But the rarity of blue is not just limited to animals.
Blue pigments are uncommon everywhere in nature.
There are no blue foods.
Less than 10% of flowers are blue.
And the two things that most of us
think of as quintessentially blue, the sky and the sea, also
only appear blue because of the physics of light scattering.
NARRATOR: They say you have to see something
with your own eyes to believe it.
But nature shows that your eyes are easily deceived.
We may not know why blue is so rare,
but now we have to wonder, if you can’t trust your own eyes,
what can you trust?
Please follow and like us: